How to anticipate hiccups in health care 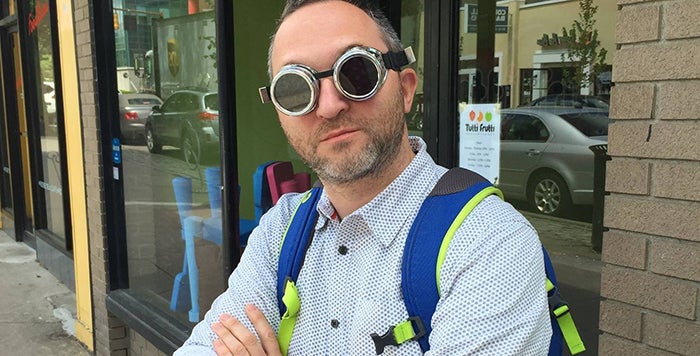 As the worldwide race to a coronavirus vaccine continues to top headlines, several areas of uncertainty still remain. Beyond questions of efficacy, how will health care providers distribute the vaccine at the rapid level that the state of the world will require? Pediatrics practices could face additional roadblocks with the process of administering the solution to fearful children, who have already endured extensive confusion as a result of an unprecedented global health emergency. A burgeoning solution? Change children’s perceptions of needles and vaccinations.

Few particularly enjoy getting a vaccination, but Dmitriy Babichenko knows that young children often have a more difficult time with it than others. To address this, Babichenko is collaborating with the Psychology Department and Pitt’s Center for Enhancing Triage and Utilization for Depression and Emergent Suicidality (ETUDES) to develop an augmented reality game for Android devices. The team hopes the game will hopefully help alter the perception of needles in children ages three to five.

“If we can get kids to have a positive perception of needles and view them as something that’s supposed to heal them and make them feel better, instead of something they’re supposed to be afraid of, it will have other long-term benefits,” Babichenko says, alluding to other benefits such as preparation for school-mandated vaccinations.

A child user will point a tablet’s camera at a designated sticker image that a parent or guardian printed at home. The program uses image-target recognition to project 3D objects and characters into the physical environment. In one example, a flying cartoon dragon appears on the device’s screen and begins to exhibit symptoms of illness. Knowing the dragon needs a vaccination to help him feel better, the user will grab something available to them resembling a syringe, such as a pen, and place it in front of their camera. The game will recognize the shape of a pen and virtually replace it with a 3D representation of the syringe, and the child will pretend to inject medication into the projected dragon. The dragon will behave erratically and avoid the needle, so the child has to use their voice to calm down the dragon.

The game analyzes voice volume and pitch in order to appease the dragon. Once this happens, the child can give the dragon the injection, and the two will become friends. Study participants will wear an Empatica wristband during trials to monitor stress levels through heart rate and galvanic skin response following various app scenarios. All stickers and design projections share the same goal, which is to reduce stress at the sight of needles, change children’s perceptions of needles and injections, and reduce vaccine avoidance.

“I hope that it [will be] something doctors can just recommend, and people can just print these stickers at home and hang them up on the wall and download an app and that’s it,” Babichenko says. “It could be done in preparations for visits so it doesn’t increase the burden of the health care system.”

Babichenko works with Dr. Jennifer Silk, PhD, of the Psychology Department, researchers from the ETUDES Center, and SCI PhD student Patrick Healy to develop the game and evaluate its efficacy with pediatric patients. The project is funded through ETUDES with a grant from the National Institute of Mental Health. Babichenko estimates they will finish developing the game by December, with efficacy evaluation studies to start in January 2021.

Learn more about our faculty experts

Discover the goals and motivations for some of our faculty’s research by reading their individual stories.